Promises of a Passport or Passport of Promises (2006) 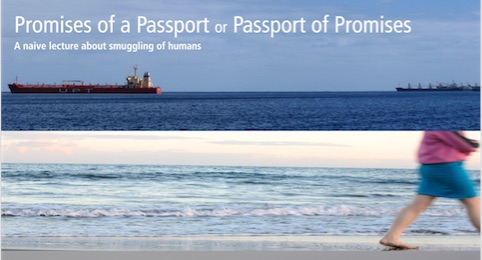 Performancelecture about smuggling of humans.

Every year more than 20 million people move,
and half of these are traveling illegally.

A lecture where you are served hard facts about smuggling of humans, you hear stories from refugees, smugglers, idealists and criminals, you see pictures from when Kristina traveled to the Canary Island to spot the boats with refugees arriving to the promised land and in the end the story becomes personal and nothing becomes obvious anymore.

A naive lecture where the truth might escape into imaginative landscapes, but still holding on to the reality of a lecture, through powerpoint, video and overhead.

About traveling and escaping, freedom and border crossings.

“I think when you see a passport, really what you are seeing is a body
there, because it is about a definition of a body. A body can travel from one place to another, only based on the fact that there is a passport that is defining us. That can sometimes be helpful, sometimes detrimental.”
Felix Gonzales-Torres

“You shouldn´t get confused of the form of the perfomance. The performance at the Arts Academy is an important voice, which cut up all the old wounds of an old world activist. Most probably it will also force others to think about their own life structure and reality. This performance is based on Junttilas own experience and research on human smuggling.

The performance does not charge the recipient. Although not every fact might not be true, most of what we hear stick to the listener as harsh news.
But can a lecture be theatre? A stupid question if the voice of the critique should decide. Art has always – from the start of cave paintings and folk art – chosen form according to its purpose.
Humanity evolves both by getting more knowledge and through emotions, morality and philosophy. In this endless journey art has not only an important task, but also many faces.”

Final work for Bachelor of Theatre at the Art Academy, Turku.