1+1=1 has a mission: to make us all alike. The performance will turn upside down assumptions about who has the right to define the Finnish culture. Immigrants living in Finland will guide the members of the majority population on how to best become integrated into Finnish society. Can it be that those that see Finland from an outside perspective might be better able to communicate the uniqueness of the culture? Will Finland become a better country if we are all more alike? Will Finnish people allow themselves to be integrated by immigrants?

This part of the performance was a solo performance on Saturday night at TEHDAS Theatre where Kristina and the audience successfully became all alike. In the process of becoming alike there was a chance to sing Finnish Karaoke. The performance ended in the opening of a photo exhibition with prosecco. 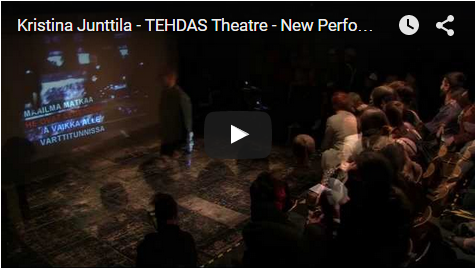 The performance is made in collaboration with immigrant artist Sibel Kantola and Sibiry Konate, who work as part of the Taide Kotouttaa (Art Integrates) project.